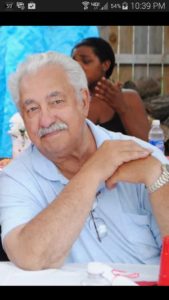 My Papa, Joseph Clements was born Charles Fiedler in October of 1933 in Detroit. When he was 3 years old he was given up for adoption. He was adopted by Bessie and Charles Clements who gave him the name Joseph. The mystery of his biological family would haunt him until he was well into his 80s. He was such a vibrant, upbeat person even in his old age. He valued family more than anyone I’ve ever witnessed to this day. He had 6 children of his own, one of which he met at 83 yrs. old and took on a lot of people as family throughout his years. He didn’t sugarcoat much, was always very verbal about his opinions and contribution of wisdom. His legacy consisted of being a huge part of the church for many years, owning his own business, working in GM until retirement, serving for his country, but most of all his love of family. He had such a way of expressing himself and he gave the credit to growing up an only child with white skin and black parents. Growing up in the times that he did, he faced a lot of different obstacles that he never let take control of his life. He had fairer skin. So much so, that in the early 50s, he would be kicked out of “colored-only” bars.  For years, I remember hearing my grandfather ponder on the existence of his biological family.

In 2014, at 81 years old, Papa finally received his real birth certificate listing his parents as Paul

Smith and Evelyn Fiedler. At which time, he proceeded to get their death certificates that listed next of kin. During this time, through Ancestry.com we began to find more answers. We found and became in contact with both the Smith and Fiedlers’ side of the family. For the first time, my Papa was meeting his family in the flesh. The joy in his heart and eyes still makes me happy to this day. Paul was a black man and Evelyn was a white woman. He had a biological sister, Mary Joy who recently passed and had been looking for him all her life. By his half-sister, we were told that at some point Paul became under the impression that his only son was dead and it effected the remainder of his life tremendously. I remember the day we were invited to his nieces’ home to eat and look over pictures of the family we never knew, it was a very emotional day for us all. He was even gifted with hats Paul always wore. We had connected with Pauls’ family in Detroit and wanted to truly connect with Evelyns’ side, but to our surprise we weren’t as welcome. Story goes that Evelyn put him up for adoption, she moved on to have another family with a white man. Not that it made much difference to us, we just wanted to connect with our long lost family. Papa actually went and was able to sit down and talk to Evelyns’ eldest daughter, his half-sister, for a short time and later received a letter with photos of her. The letter was a request not to contact the family again. We arrived at a very crucial time in their lives as their loved one, who would have been Papas’ half brother Dennis, had just passed. Through the grapevine, the younger generation of the Fiedler family became aware of my grandfathers’ existence and wanted to reach out regardless of their elders’ opinion. His nieces, Pam and Lisa Christianson and Nephew Dave Lowin traveled across Michigan to visit him for the remainder of his life.

Not very long after meeting his family he was diagnosed with stage 4 bladder cancer. This was a very challenging time we all had to grow through as a family. The common goal of promoting the longevity of his life and being moral support brought us all closer together. I remember my grandfather so bluntly saying that he was ready to go on to see the Lord and didn’t want to go through chemo. We all struggled with the idea of chemo, but wanted to prolong and enhance the quality of his life so we took interest into healthier, more natural alternatives. Papas’ diagnosis caused a ripple effect in our lives, we couldn’t look at things the same. Through everything, how happy and grateful he was just to have us around truly challenged our perception of what happiness is. For a long time he felt there was something missing. But the whole time, he was the peace to the puzzle.

We’ve all made decisions that were not so good and we’ve all made decisions that will probably try to haunt us for the rest of our lives. No Human being of this day and time has all the right answers to life and unfortunately  some of us had to learn by trials and tribulations.  When your young you have growing pains and that’s expected because experience is the best teacher. Contrary to popular belief  situations and opposition DOES NOT stop in adulthood. As a matter of fact that’s when life get’s real and your faced daily with having to make decisions that will affect the rest of your life and your family. I don’t understand how shallow and out of touch some people are now a days concerning the decisions that they make. When will people realize that somehow and someway their decisions NOT only affect them but their family especially their children (if applicable), spouse (if applicable), parents and  friends. I have to be honest with you, nobody told me this as a child and because no one did I had to learn the hard way. Getting pregnant at 16 and forcing my already hardworking  single Mother to help her baby raise a baby was ludicrous and selfish. I didn’t get it then…..BUT I get it now and I understand that every decision I make affects not only me but those I love as well.

When I think of the word “Woe”  I think STOP! PAUSE! PRAY! Webster defines it as “great sorrow, distress , trouble, gloom. Have you ever made any decisions feeling any of these ways?  Have you ever experienced regret and had a setback because of your decision?! Yeah……I have too and this is why we must teach our children and grandchildren  that they MUST always make good decisions concerning themselves. You get out of life what you put into life and if you’re a hell raiser……then expect a life full of hell. If you choose to live by the gun….you will die by the gun. Our decisions shape our future and they prepare our path along our journey.  Have you ever thought where does a  generational curse comes from or how did it start? It all started with a DECISION and now it has somehow seemed to destroy the family unit.

I actually feel sorry for MiMi Faust because by now she should have learned some type of lesson from her journey of life. I look at the fact of how her Mothers decision of becoming a scientologist  and abandoning her daughter for the sake of religion has truly affected her. The fact that her Father had a stroke the week of her sex tape release is evidence of how her decision affected him.  She decided to do a sex tape with a man whose not her Husband and does not have her best interest at heart. And because of her lack of judgement, irresponsibility, selfishness, impulsive behavior, and sexual desire her daughter will suffer shame and embarrassment because her Mother gave herself to a undeserving man who used and exploited her.

I think of all the absent Fathers who are either dead on in prison because of their decisions to sell drugs, murder, rob, or just not be apart of their child’s life. I think of all the Mothers who sold their children for drugs, allowed their child to be molested just to have a man. Or those who’ve murdered, neglected, and disrespected the honor & title of  what a Mother truly is. EVERYDAY is a NEW dawning and you we will be faced with having to make decisions and from this day forward for the sake of our families and communities. Let us learn from the mistakes of others and understand that we have a CHOICE & we have OPTIONS if we think things out. There is always a way of escape and that’s a promise! Strive to make the best decisions  concerning yourself on this journey of life so that you can WIN, LIVE, LOVE, & LAUGH with NO regrets. CONNECT With Us On Social Media & Subscribe To Our YouTube Page……Leave Me A Comment and Share Your Thoughts About This Blog! Be Sure To Tune In Sundays 5 pm Est on www.wpbnetworks.com  & Thursdays 7 pm Est Saturdays 2 pm Est on www.praiseaustin.com #LetsTalkAboutIt